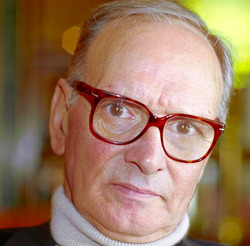 Ennio Morricone, Academy Award-winning composer for his score for Quentin Tarantino's The Hateful Eight, passed away today in Rome following complications from a fall last week.

Since 1961, Morricone has composed over 400 scores for film and television, as well as over 100 classical works. His filmography include all Sergio Leone films (since A Fistful of Dollars), including The Good, the Bad and the Ugly and Upon a Time in the West, all Giuseppe Tornatore films (since Cinema Paradiso), The Battle of Algiers, The Exorcist II, Days of Heaven, The Thing, The Mission, The Untouchables, Bugsy, Disclosure, In the Line of Fire and Bulworth.