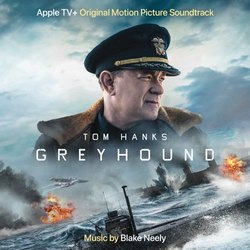 Lakeshore Records will release Greyhound - Apple Original Motion Picture Soundtrack with music by composer Blake Neely digitally on July 10. The often tension-filled score uses orchestration to ominous effect as it evokes the events inspired by the Battle of the Atlantic which took place during World War II. The action-packed film starring and written by Tom Hanks will make its global debut to audiences in over 100 countries on July 10 exclusively on Apple TV+.

Tom Hanks stars as a longtime Navy veteran who, as a first-time captain, is tasked with protecting a convoy of 37 ships carrying thousands of soldiers and much-needed supplies across the treacherous waters of the Atlantic during World War II. For five days with no air cover, the captain and his small force of three escort ships must make their way through an area of the ocean known as "the Black Pit," battling Nazi U-boats while protecting their invaluable ships and soldiers. "Greyhound" is inspired by events during the Battle of the Atlantic, which took place in the earliest months of America's alliance with Great Britain and the Allied Forces. Stephen Graham, Rob Morgan and Elisabeth Shue star alongside Hanks. Greyhound was written by Tom Hanks, directed by Aaron Schneider and produced by Gary Goetzman.

Said composer Blake Neely, "Greyhound marks my tenth project with my friends at Playtone. Working with Tom Hanks and Gary Goetzman is always artistically exciting. They gave me a wide berth to create this score, allowing for an expansive main theme, anachronistic synths, large orchestra, relentless percussion, and musical sound design My goal for the music was to continually ratchet up the tension and almost never release, much like it would have felt for the brave soldiers at war."