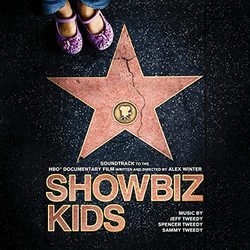 WaterTower Music has announced today's release of Showbiz Kids (Soundtrack to the HBO Documentary Film, featuring new music by the scoring unit that is father-and sons team Jeff Tweedy (Wilco, Uncle Tupelo, Tweedy), Spencer Tweedy (Tweedy, The Blisters), and Sammy Tweedy. The soundtrack features all new music from this family unit, and additionally features a new Jeff Tweedy song, "At A Distance." The entire score, including "At A Distance," was recorded and mixed at The Loft, Wilco's legendary studio and rehearsal space in Chicago.

Showbiz Kids is written and directed by former child actor Alex Winter, who relies on the perspectives of many of his peers to explore the complexities of growing up under the glare of Hollywood's spotlight, refusing to shy away from the more difficult truths about the industry. Winter's commitment to creating an honest representation of a complicated industry stems from his own childhood in show business, beginning as a child actor on Broadway at the age of ten.

In the earlier stages of Showbiz Kids development, Winter, an enthusiastic fan of Jeff Tweedy's music, was utilizing Tweedy's music as a placeholder. "That was really all that movie was responding to—in a good way," Winter told Rolling Stone. "So I thought, 'Well, hell, why don't I just ask [the Tweedys] to do the music?' I also was really drawn to a band made up of a father and his sons, as family and those relationships play such a big part in our story. Jeff, Spencer and Sam have so much personality in their music, so it just adds an enormous amount to the doc."

The Showbiz Kids soundtrack is only the second recording project featuring Jeff Tweedy, Spencer Tweedy, and Sammy Tweedy as a stand-alone unit, without any non-family members in the line-up. They recorded one track together, in 2011, as The Raccoonists - which was released as a seven-inch single.

Spencer Tweedy commented, "We got to distill some of the sounds we've spent the last several years working on, and we also got to try out a completely new way of working together. We had never composed in the studio before and it was fun to meet that challenge. It was also great to work with Alex Winter. He was generous at every turn and helped us feel like we were doing just the right thing for every cue."

And Sammy Tweedy explained "This soundtrack is unlike the other Tweedy projects because a few of the songs started ground-up with ambient synthesis, and I'd never heard what we sound like when we do that before."