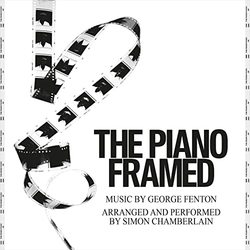 The Piano Framed is a selection of new recordings for solo piano including the never-before-digitally-released single from Ever After: A Cinderella Story, plus The Blue Planet. for which the famed composer won a BAFTA, Ivor Novello, and Emmy Award, Dangerous Liaisons, which earned George Oscar and BAFTA nominations, and furthermore You've Got Mail, Groundhog Day and The Lady in The Van. The album is arranged and performed by Simon Chamberlain and reflects George Fenton's rich musical catalogue and showcases his diverse working relationships with directors including Richard Attenborough, Ken Loach, Nora Ephron, Andy Tennant and others. The album will be available digitally July 31st with vinyl and CD following on August 14th available via www.georgefenton.com.

"It's a very personal album to me," says Fenton. "But I think actually the personal element extends to anybody listening, because we recorded in a very unadorned way – right close up to the piano. You can kind of hear every squeak and Simon breathing. It's like you're standing right next to him and he's playing for you."

Simon Chamberlain is one of London's most sought after piano players and has worked with George for numerous years. Together, they co-wrote the musical Mrs. Henderson Presents.

George has written for film, theatre and television. He has received 5 Oscar nominations and won multiple Ivor Novello, BAFTA, & Emmy Awards, and a Classical Brit.