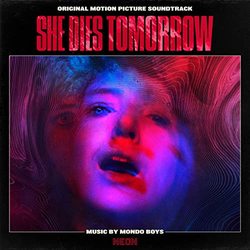 Of the soundtrack, composers Mondo Boys say, "We knew the score had to be able to handle the depth of a true existential crisis, yet not take away from the subtle comedy that is all around the story. We realized with Amy the way to score it, was to just go for a fully indulgent dark opera."

"Mondo Boys were integral to the development of She Dies Tomorrow," adds director Amy Seimetz. "I sent them footage early on and they immediately sent me back a track that became one of the inspirations for filming the rest of the movie. I am so wildly thrilled by every piece of music they send to me. They have the ability to tastefully interpret scenes and make minor adjustments to score at such a rapid pace. I am endlessly lucky to work with artists who have great instincts and who trust me."