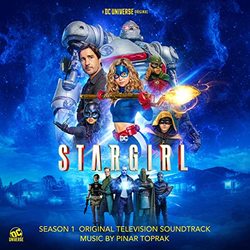 DC's Stargirl: Season 1 (Original Television Score) features 22 tracks from the debut season of the hit series. Recently wrapping its first season on both The CW and DC UNIVERSE, DC's Stargirl was recently renewed for a second season exclusively on The CW. Based on the character created by Geoff Johns, DC's Stargirl features an epic score by the award-winning film and television composer Pinar Toprak, who received her first Primetime Emmy nomination this year for her work on HBO's McMillions.

"I'm a huge fan of show creator Geoff Johns and everything he's done," remarked Toprak. "When we met, the way he talked about Courtney, the character, and his vision for DC's Stargirl really touched my heart. Obviously, I love this genre to begin with, so it was a no-brainer to compose the score. Working with Geoff was just one of the best experiences of my career, to be honest."