'The One and Only Ivan' Soundtrack Released 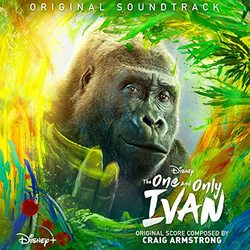 Walt Disney Records releases the digital original soundtrack to Disney's new movie The One and Only Ivan, streaming exclusively on Disney+ today. Directed by Thea Sharrock, the movie and soundtrack feature an original score by composer Craig Armstrong and the original end-credit song, "Free" written by Diane Warren and performed by Charlie Puth.

The original song "Free" was written by iconic songwriter Diane Warren, an 11-time Oscar nominee and GRAMMY, Emmy and Golden Globe award winner whose songs have been featured in over 100 motion pictures and has been inducted into the Songwriters Hall of Fame. "I'm so proud to have written the song 'Free' for Thea Sharrock's amazing movie The One and Only Ivan. The theme of this movie deeply touched my heart and I hope my song deeply touches yours as well. Charlie Puth brought this song to life in a way nobody else could. It is a very special and meaningful song to me, and I hope it becomes one for you as well. I hope it makes you feel a little more free," said Diane Warren.

"Free" is performed by multi-GRAMMY nominated and multi-platinum singer/songwriter/producer, Charlie Puth. At only 28 years old, Puth has proven to be one of industry's most consistent hitmakers and a celebrated, multi-dimensional artist. Puth has already amassed eight multi-platinum singles, four GRAMMY nominations, two Billboard Music Awards, a Critics' Choice Award, and a Golden Globe nomination.

"It was very exciting to work on this movie and to collaborate with the incomparable Diane Warren on the song "Free," said Charlie Puth. "I can't wait for everyone to hear what we created together for this special film."