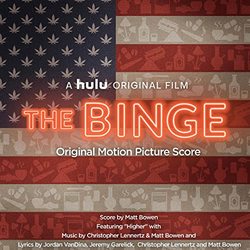 American High Records' The Binge (Original Motion Picture Score) with score by Matt Bowen is now available on all major streaming platforms. Hulu's The Binge stars Vince Vaughn and Skyler Gisondo and is set in a fictional time when all alcohol and drugs are illegal except for one day, Binge Day.

The Binge is directed by Jeremy Garelick (The Wedding Ringer) and written by Jordan VanDina. The film is produced by American High and LD Entertainment.

Bowen's multi-genre score takes listeners on a trip when three high school seniors get caught up in various Binge Day shenanigans. He co-wrote the score's themes with composer Christopher Lennertz, with whom he's been collaborating with for the past decade on a variety of projects. The album features the hilariously profane original musical number "Higher" with music by Lennertz and Bowen and is performed by cast members Skyler Gisondo (Griffin), Dexter Darden (Hags), Eduardo Franco (Andrew), Grace Van Dien (Lena), Zainne Saleh (Sarah), Marta Piekarz (Kimmi), Esteban Benito (Seb), and Brittany Garms (Dakota). Lyrics for "Higher" are by VanDina, Garelick, Lennertz, and Bowen.

"Being on this film from day one and co-writing the score's themes with Christopher Lennertz felt like being dealt pocket aces," stated Bowen. "Director Jeremy Garelick was constantly encouraging me to follow and trust my gut. I'd like to think the end result is something special and unique, and most importantly, just feels like it's really a part of the movie's fabric."