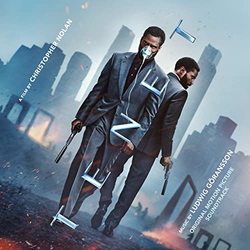 Describing his process, Göransson says, "There are a lot of sound illusions in the score. I spent an inordinate amount of time taking familiar sounds, then, both organically and digitally, manipulating them so that they reflected the complex world of Tenet. One of the biggest challenges for me in writing this score was how do I provide a musical roadmap for audiences as they experience something so conceptually ambitious and technically unprecedented?"

Although he had never worked with the director before, Göransson explains that, "Chris has had a colossal impact on the way I approach and experience film. Speaking with him, about his vision for the score, I was immediately struck by the depth of his musical knowledge and his drive to push the boundaries in music production with Tenet. When I started writing, those conversations became listening sessions where we would dissect the sounds, harmonies and textures, then refine them little by little. By the time Chris left to shoot, he had two hours of music to listen to as he traveled all over the world. He would write me notes from wherever he was with ideas on which sound belonged to which character, or how the music could interact differently with a scene he was shooting that day."

Travis Scott created and is featured on the original song "The Plan," which resulted from a suggestion by the composer. Christopher Nolan offers, "One of Ludwig's suggestions was to bring in Travis Scott, show him the film and get his insight. Travis watched the film and really connected with it and in the end, his voice, the song he created using Ludwig's tracks and the way in which we wound up layering his voice into various elements of the soundtrack became really the final piece of this puzzle that we'd been working on for so long."

Göransson further elaborated. "When I watched the movie in its entirety, I started to feel that the end needed a new voice to reflect the culmination of the Homeric journey we've just experienced. The first artist that came to mind was Travis Scott. Conceptually, his artistic voice is very much in step with the sound palette we've created for Tenet, and I felt that he and Chris might almost be kindred spirits when it comes to creating fully realized worlds with music and visuals. Travis became one of the first people in the world to see Tenet, and his observations of the experience were exactly what Chris was looking for. His song is such a perfect fit for the movie that Chris and I asked if we could weave a short snippet of his vocal into the score at various points throughout the film. Travis Scott did indeed create the missing piece of the puzzle."