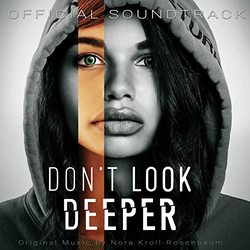 "I wanted the listener to be carried by the music, lifted by it, safely led by a strange familiar melody that flows throughout the story," says Nora. "The music weaves and morphs sounds together—flutes with moogs, 808s with orchestra, processed voices with string quartet. The identity of the score embraces a plural space that loves on technology and pushes and subverts the possibility of the acoustic."

"I had so much fun collaborating with the brilliant vocalist and songwriter Taura Stinson on a number of tracks for Don't Look Deeper. We made lists of body parts and deconstructed robot identities to create vocal shapes and contours. To score the flashback opening of episode 10, Catherine Hardwicke [director] came up with the radical idea of re-recording Diane Warren's iconic 'If I Could Turn Back Time,' performed by an 8-year-old singer. Eden Kontesz filled Cher's famous shoes, and the track, produced in collaboration with Tim Kobza, bizarrely underscores images of a child dissecting a doll," says Kroll-Rosenbaum.

"Composer Nora Kroll-Rosenbaum had a deep understanding of Aisha's character as someone who doesn't fit in – doesn't feel quite right in her skin," said Don't Look Deeper director Catherine Hardwicke. "She created music that is emotional and intriguing – and has vocal elements of human 'breath' – that subtly connect us to the humanity of the character. Nora was able to create a very original, powerful score that at times is haunting, soothing, terrifying, and always somehow—beautiful."