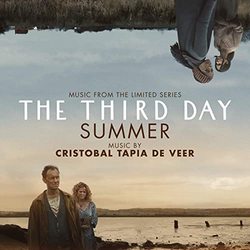 Milan Records announces the release of The Third Day: Summer (Music from the Limited Series) with music by award-winning composer Cristobal Tapia de Veer. Available everywhere Friday, September 18, the album features music written by Tapia de Veer for the first half of Sky and HBO's six-part limited series starring Jude Law and Naomie Harris. The first of three episodes encompassing the "Summer" chapter of The Third Day premiered on HBO and HBO Max on Monday, September 14 and Sky Atlantic (UK) on Tuesday, September 14.

Of the soundtrack, composer Cristobal Tapia de Veer says, "The music evokes a dialogue between Sam and the island, Sam and his subconscious. It is his mind being reflected back to him by the surroundings, as well as his mind being manipulated by them, forming some kind of vicious circle. I recorded all the melodies humming on my phone during long walks deep in the forest, far from any civilization, to capture a sense of being lost or isolated while increasing the feeling of connection to the woods and subconscious mind."

Created by Dennis Kelly and Felix Barrett, the ground-breaking series from Sky Studios in collaboration with HBO, Plan B and Punchdrunk. The Third Day is a limited series which consists of three separate but interconnected stories that all take place on Osea Island in the UK; 'Summer', 'Autumn' and 'Winter'. 'Summer' stars Jude Law as Sam, a man drawn to a mysterious island off the British coast. Isolated from the mainland, Sam is unable to leave the idyllic and dangerously enchanting world he has discovered, where the secretive rituals of its inhabitants prompt him to grapple with experiences of loss and trauma hidden in his past through the distorted lens of the present. As boundaries between fantasy and reality fragment, his quest to unlock the truth leads the islanders to reveal a shocking secret. 'Summer' is written by Dennis Kelly and directed by Marc Munden.