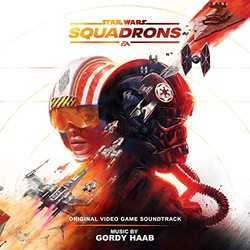 The game features thrilling 5v5 multiplayer starfighter combat along with an original Star Wars story set after the events of Star Wars: Return of the Jedi. In this authentic new story players will speed to the frontlines of an escalating conflict experienced from the alternating perspectives of two customizable pilots, one serving the New Republic and the other the Galactic Empire.

Recorded with a world-class orchestra at Oceanway Recording in Nashville, the soundtrack includes 26 pieces from the game with a retro, stylized feel reminiscent of the iconic films that launched the Star Wars franchise decades ago. The music was produced by Olivier Asselin, Gordy Haab, and Steve Schnur.

Haab said, "One of the greatest honors in my life has been composing music for Star Wars projects, and Squadrons is no exception! Every fan's childhood dream is to fly one of the iconic ships; self included. So I set out to compose a score that would exhibit my own excitement about hopping into an X-wing and going full throttle. Much of the Star Wars: Squadrons soundtrack features the full power of a symphony orchestra. But along came Covid-19, and our final recording plans were derailed. But, where many might have said recording an orchestra is impossible, EA's head of music, Steve Schnur and I saw an opportunity to meet the challenge head on, by recording the remaining music with an orchestra of the world's finest musicians...one player at a time - one instrument per day. And frankly, the results are outstanding. All this to say; Covid is no match for my love of Star Wars. I truly hope everyone finds playing the game as inspiring and I found writing its music!"

Steve Schnur, Electronic Arts' President of Music said, "Creating the original score for any new Star Wars title may just be the most formidable challenge in music to begin with. And when Covid hit, Gordy was forced to finish from a home studio by recording the best musicians in the world one instrument at a time. Even under those circumstances, his score has surpassed all expectations: Squadrons once again proves that Gordy Haab is one of the few composers who can consistently enhance the Star Wars legacy."