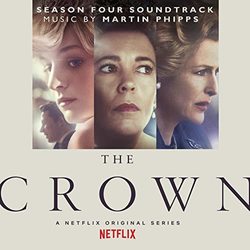 Sony Music today announces the November 20 release of The Crown: Season 4 (Soundtrack from the Netflix Original Series) with music by BAFTA and Ivor Novello Award-winning composer Martin Phipps. Available for preorder now, the album features music written by Phipps for the fourth season of the critically-acclaimed Netflix Original Series.

Of the soundtrack, composer Martin Phipps says, "In Season 4, the world of our middle aged characters is blown apart by the arrival of Princess Diana. I wanted to represent this bombshell in the music, culminating in Episode 5 when Australia goes nuts for Diana and the score switches to a brash, technicolor electronic palette. We are also in the '80s throughout the season, so the score is sprinkled with retro synth elements. Peter Morgan (showrunner/general maestro) was clear that he also wanted a strong sense of musical continuity with Season 3, so I updated many of our familiar, more orchestral themes from previous episodes. One of my favorite scenes is the reuse of the Simple Harp theme, as Diana returns triumphant from shooting a stag during her 'Balmoral tests.' I hope you enjoy the new series, and its score, as much as I enjoyed writing it."

Phipps reprises his role as the show's composer following a successful third season in 2019, for which he notably garnered his sixth career Emmy Award nomination in the category of "Music Composition for a Series." Available everywhere now, his Season 3 Soundtrack received widespread critical acclaim, with The Los Angeles Times noting, "He accompanied Queen Elizabeth's middle-age years, and the national tragedies and personal tribulations she encountered, with pulsing electronics, men's choir and opulent orchestration that was simultaneously grave and groovy." Phipps has continued to expand his influence and sound with each subsequent score.