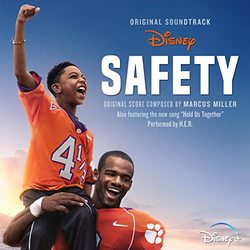 Safety is a drama inspired by the empowering story of former Clemson University football safety Ray McElrathbey (Jay Reeves), a young man facing a series of challenging circumstances, whose dedication and persistence help him to triumph over repeated adversities. Aided by his teammates and the Clemson community, he succeeds on the field while simultaneously raising and caring for his 11-year-old brother Fahmarr (Thaddeus J. Mixson).

Commenting on his score Miller said, "The story is told in a beautiful, soulful way so it was important that the score convey emotion that fit this very special relationship - not too sweet but very deeply felt." He continued, "When I was first thinking about the score, I knew the biggest deal would be the football scenes - lots of excitement, energy and screaming fans. In my mind that meant drum line percussion, the sound that instantly says 'college football.' But I wanted to combine that sound with a large orchestra in order to support the size and drama of those scenes."

Miller's biggest challenge was recording an orchestral score during the pandemic. The score features instruments played by Miller, including the piano, bass, saxes, clarinets, percussion, guitar and synths. "I began recording one instrument on top of the other and this layering gave me the foundation that I used to compose the orchestral parts. From there we found musicians who had the ability to record at home and we asked each one to add their parts remotely. You can hear their super-positive spirit in the music. I think the challenges actually helped create something that was even more special than if we had recorded this score in the traditional way."