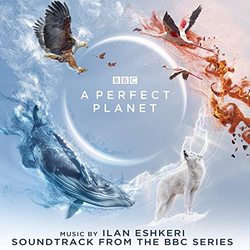 Sony Music today announces the January 8, 2021 release of A Perfect Planet (Soundtrack from the BBC Series with music by composer Ilan Eshkeri. The album features the music from Eshkeri's fourth collaboration with Sir David Attenborough, the legendary naturalist who will narrate the BBC series.

Composer Ilan Eshkeri says: "Creating the music for A Perfect Planet has been a hugely rewarding experience. The series celebrates the extraordinary world we are a part of as well as showing the delicate balance of the systems that support life, and what we need to do to ensure its future stability. It's a message that's very important to me and one that I believe we have a responsibility to engage with – in a way that not only educates but inspires the next generation. This influenced my approach to the music, and set me on an unconventional path. Composing the music for A Perfect Planet has also been enormously challenging – not least because of the unprecedented logistical issues of trying to record an orchestra during the lockdown! I'm grateful to everyone at the BBC and [production company] Silverback who supported me and the ideas I threw at them and I hope my music can play a small part in helping to inspire change."

In five parts, the series explores how forces of nature – volcanoes, sunlight, weather and oceans – drive, shape and support Earth's great diversity of wildlife. Its final episode examines the impact of humans on the natural world and asks what can be done to restore a perfect balance. The series includes stunning footage filmed in 31 countries across six continents.

The ongoing coronavirus crisis had a significant impact on post-production including the music. Series producer Huw Cordey says: "Sir David embraced new ways of recording his voiceover and the music for the series had to be finished in Iceland, one of the few places we could gather a string orchestra and record them playing live. Covid restrictions prevented us doing the same with brass and woodwind instruments so they had to be recorded separately in each of the musicians' living rooms."