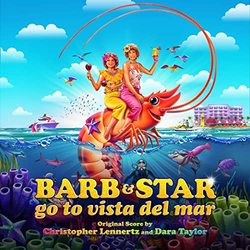 Of the soundtrack, composer Christopher Lennertz says, "It was such a joy to work with Josh, Kristen, Annie, and the whole team to bring to life the ultimate pandemic escape comedy. An off the wall vacation of a lifetime with song and dance numbers, talking crabs, an evil megalomaniac and her henchman, all wrapped up in a candy-colored tropical comedy gave us the perfect canvas to blend everything from opera to salsa, from bossa nova to soft rock. This movie is exactly what the world needs to check out and laugh right now."

"One of the best things about Barb and Star is that it's unexpectedly genre-bending while always staying hilariously fun," adds composer Dara Taylor. "Working with Josh, Kristen, and Annie was a blast from start to finish and they were excited to take a musical journey from quirky comedy to bombastic action to toe-tapping island music and everything in between."

Of his inclusion on the soundtrack, comedian and songwriter Richard Cheese says, "Kristen Wiig and Annie Mumolo were already fans of my Richard Cheese & Lounge Against The Machine band, and while they were writing the script, they decided to cast me as the lounge singer character. They sent me all the songs they had written for Richard Cheese to sing in the movie, and when we got on set, I ad-libbed some additional lyrics." Of single "I Love Boobies," Cheese continues, "This is the first song I sing in the movie, when Barb and Star go out for cocktails on their first night of vacation. It sets the tone for the swinging singles bar scene, where they encounter a mysterious man and begin a night of wild adventure and romance."