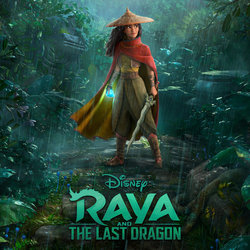 Available today from Walt Disney Records, the Raya and the Last Dragon Original Motion Picture Soundtrack features score by Oscar-nominated, Emmy and Grammy-winning composer James Newton Howard. The digital soundtrack also includes the new original song, "Lead the Way," written and performed by Grammy-nominated artist and songwriter, Jhené Aiko. Walt Disney Animation Studios' Raya and the Last Dragon will be available on Disney+ with Premier Access in most Disney+ markets, at the same time as it is released in theaters on March 5, 2021. Premier Access for the title will be priced at $29.99.

Commenting on his score, Newton Howard said, "Writing on Raya and the Last Dragon was nothing but a joyful and creatively inspiring musical experience. Working in animation is a truly collaborative process, and the directors, cast, and animators brought the characters to life in such a thrilling and dimensional way. I worked with them to create a musical world that was as vast and varied as the fictional world of Kumandra where our story is set. The directors' vision for the world was largely inspired by Southeast Asia and particularly Indonesian culture, so I wanted to look there first for inspiration and sounds to incorporate into my hybrid orchestral/synth palette. The issues of division and healing a fractured society that the film tackles are very meaningful today, and the deep core of the film allows for the music to have an equally strong emotional impact. I am excited for all to listen!"

"Lead the Way" is featured in the end credits and the track was produced by Julian-Quán Việt Lê (Lejkeys). The music video for the track featuring Aiko is directed by one of Raya and the Last Dragon directors, Carlos López Estrada, and will be released next month.

Aiko drew inspiration for the song from the theme of trust in the film, and says, "What I love about the song is that it's upbeat, it's fun, but it also has a message for the world, for everyone. A message that is very timely right now. The main themes are trust and taking the first step in trusting others and how we can get so much more accomplished when we really come together. It was an easy song to write because these are things that I truly believe in."