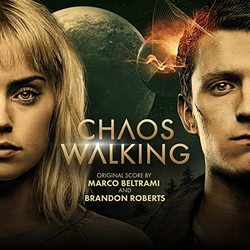 In celebration of today's theatrical release of Lionsgate's Chaos Walking, the new film starring Daisy Ridley and Tom Holland from the director of The Bourne Identity and Edge of Tomorrow, Milan Records announces the April 2 release of Chaos Walking (Original Score) with music by Marco Beltrami and Brandon Roberts. Available for preorder now, the album features score music from the highly anticipated film. The score continues a long tradition of collaborations between the two-time Academy Award-nominated composers Beltrami and Roberts, who also garnered an Emmy Award together for their work on Free Solo.

Of the soundtrack, Beltrami and Roberts say, "The score for Chaos Walking provided a unique opportunity for us to create a musical language for a fictitious world that was simultaneously both familiar and alien, and in so doing, explore crossing genres that are rarely combined. There are otherworldly sci-fi elements, as well as classic gritty western themes. We had a lot of fun implementing new instruments that would define this cross pollination. It was an adventure to live in this new musical world."

To herald the release of the album, lead singles "Friendship Theme" and "Posse on the Move / Exploring the Ship" arrive today. "Friendship Theme" stirs up longing through emotionally charged strings. With its slow tempo, the track ebbs between serious and sweet passages buoyed by bold and purposeful forward motion. Representing the other end of the spectrum, "Posse on the Move / Exploring The Ship" hinges on evocative, yet eerie synthesizers as a dark crescendo culminates on a fleeting moment of brooding intensity.