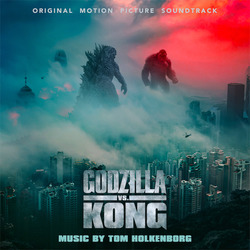 WaterTower Music is pleased to announce the upcoming release of the soundtrack to Warner Bros. Pictures' and Legendary Pictures' epic adventure Godzilla vs. Kong, the long-awaited showdown between two icons in the feature directed by Adam Wingard. Godzilla vs. Kong (Original Motion Picture Soundtrack) features 15 new tracks created for the film by Grammy-nominated composer Tom Holkenborg, aka Junkie XL.The album will be released on March 26, a few days before the film's March 31 release nationwide in 2D and 3D in select theaters and IMAX. In the U.S. It will be available on HBO Max for 31 days from theatrical release. Furthermore, today, March 12, sees the release of the Godzilla vs. Kong (Battle of the Beasts) EP, allowing fans the opportunity to now hear two tracks early, before the soundtrack release. It features the Titans' themes "Pensacola, Florida (Godzilla Theme)" and "Skull Island (Kong Theme)."

Tom Holkenborg is abundantly clear about his passion for the project. "I'm a huge fan of Godzilla and Kong! I've watched over 35 Godzilla movies over the years, so geeking out with Adam over this film came naturally," explained the composer. "Kong is such an iconic character with over 90 years of scoring history behind him, and this was a perfect project for me to flex the retro monster orchestral scoring side of my brain, mixed with my very contemporary electronic side - in this case `80s sequences and basslines in the vein of John Carpenter. In this score I am trying to emphasize the insanity of Godzilla and the humanity of Kong. In the spirit of the film, it was fun to get my mad scientist coat on and make some monstrous sounds!"

Holkenborg's unique approach to scoring blends historical understanding of classical scoring technique with an embrace of cutting-edge technology. His artistic choice for Godzilla's music sees the composer embracing his modern roots, leaning towards a robotic, all electronic score. While his take on Kong is a deep dive into the history of this monster's score – the previously referenced 90 years of scoring history – combined with sourcing rare instrumentation like stone flutes and marimbas. Tom sampled a custom made 6ft mega bass drum and the biggest bass amp in the world – a 13-foot-tall amp designed by lengendary bass amp maker Ampeg – to give the score its monstrous elements.