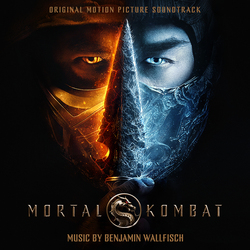 WaterTower Music is excited to announce the April 16 release of the soundtrack to New Line Cinema's explosive new movie Mortal Kombat, which brings to life the intense action of the blockbuster video game franchise in all its brutal glory, pitting the all-time, fan-favorite champions against one another in the ultimate, no-holds-barred, gory battle that pushes them to their very limits. The film is helmed by award-winning Australian commercial filmmaker Simon McQuoid, marking his feature directorial debut, is set for release nationwide in theaters on April 23 and will be available in the U.S. on HBO Max in 4K UHD, HDR10, Dolby Vision, Dolby Atmos on supported devices for 31 days from theatrical release. It will be distributed worldwide by Warner Bros. Pictures.

The Mortal Kombat (Original Motion Picture Soundtrack) contains all new score by Golden Globe-, Emmy-, and Grammy-nominated composer Benjamin Wallfisch. And today, the first single from the album was released. Techno Syndrome 2021 (Mortal Kombat) is composer Benjamin Wallfisch's musical homage to the music, fans, and enduring lineage of Mortal Kombat. The track was produced and performed by Wallfisch and mixed and Mastered by Tom Norris (Skrillex, Gaga, Zedd).

Director Simon McQuoid discussed working with Wallfisch on the score and on "Techno Syndrome 2021". "Ben and I both knew that we needed to use the classic Immortals track 'Techno Syndrome' as source material for the entire score of Mortal Kombat. But along with that we knew that an updated elevated version of the song also needed to be created. And Ben certainly delivered, I am so excited by this new 2021 version of the track, when I first heard it, it blew my mind. Actually, Ben kind of blew my mind on a daily basis through the making of this film, so we can all thank Benjamin Wallfisch for his genius and passion in creating 'Techno Syndrome 2021'.

Benjamin Wallfisch further elaborated. "When I was invited to come on board Mortal Kombat, I was very aware of the responsibility that comes with scoring a franchise so deeply embedded in pop culture and with such a passionate fanbase. My first question was what can we do with 'Techno Syndrome,' a piece of music so much part of the DNA of the game and the original movies? What motifs could be reinvented and blown up to a full-scale symphonic sound world in the score, and might there be room for a full reinvention of the whole song as an EDM single in 2021? A huge thank you to The Immortals for giving us their blessing to reimagine their classic track in this way, as a celebration of the world of Mortal Kombat and its fans, and of the uplifting power of Electronic Dance Music, which the original did so much to light the fuse of 30 years ago."

The soundtrack release date is set for April 16 and features 24 tracks by Wallfisch, who interpreted the film's themes and emphasized the story's hard-driving, visceral action through his music. Fans will be thrilled to hear the composer's heart-pumping score, which includes themes for such characters as Lord Raiden, Sub-Zero, Sonya Blade, Cole Young, Shang Tsung, Liu Kang, and Kung Lao, among others, and epic battle themes from the film, including "Kano v Reptile" and "Sub-Zero v Cole Young."