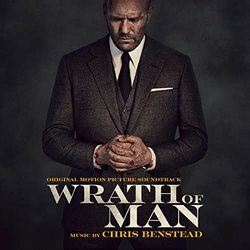 Of the soundtrack, composer Chris Benstead says, "The score for Wrath of Man is centered around the cold and mysterious character 'H'. Super close-mic'd cellos and double basses were used (and abused) to created awkward and jarring stabs as well as angry and unnervingly dark textures. A stoic main 'hook' is constantly repeated in different guises to help amplify the sense of impending unease and, ultimately, revenge. Sometimes only percussion was needed to create the brutal and exigent action cues. It was an amazing experience to collaborate with the utterly brilliant Guy Ritchie once again."