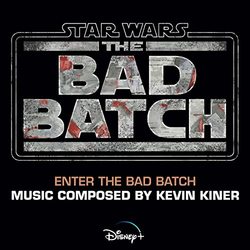 Enter the Bad Batch, the theme from the Disney+ original animated series Star Wars: The Bad Batch is available today from Walt Disney Records. The series debuted on May 4, with new episodes releasing each Friday, streaming exclusively on Disney+. Award-winning composer Kevin Kiner scores all 16 episodes of the series, with two volumes of the soundtracks set for release as follows:

Kiner comments, "To all the Bad Batch fans. It is with great pleasure that we release this single from the first episodes of Bad Batch, which includes music from the Bad Batch vs the Droids as well as the Bad Batch theme and loads of action music. I'm so happy to be a part of this show and to continue to grow what I started with Clone Wars! More to come!!"