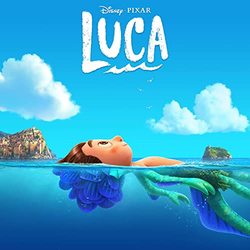 The score was recorded with an 82-piece orchestra at the Newman Recording Stage, and was orchestrated and conducted by Mark Graham. Romer performed on accordion and acoustic guitar.

Luca director Enrico Casarosa turned to Romer to help set the stage and convey the youthful point of view of the main character, Luca "I love his style-his accordion skills-and his ability to blend his style with the nuances of Italian music for this score," said Casarosa.

The film is set on the Italian Riviera during the late 1950s, early 1960s. However, said Romer, "Enrico wanted something that felt like more of a nod, or a memory, than something that felt historically accurate. He told me what he really wanted was a more Italian-sounding version of the style of music I already make, which was very exciting and freeing!"

The composer especially liked working on the film's dream sequences where Luca soars to great heights-feeling the freedom he craves. "They called for the most lush instrumentation, and usually the most wild rhythms," he says.

Romer added, "It was an absolute joy getting to make such a melodically driven score and I'm excited for everyone to see the film."