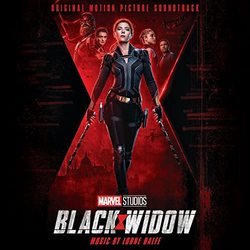 Commenting on Balfe's score in her liner notes from the vinyl album, Shortland said, "The score is fragile at times, embodying Natasha's fears and her longing for connection. Her tenuous bond to the earth. But then it is completely powerful and I get cold shivers at how fun and epic it is. Lorne takes us on a spectacular ride."

According to Balfe, from the moment he first watched the reels he felt Natasha needed a musical heritage. "I wanted to introduce the soundtrack of her story," he said. "I listened to a lot of Russian folk music—it's a very particular sound. This music is the ghost of the past that is always with her."

Balfe wrote folk music that helped define Natasha from a musical point of view. "The instrumental DNA includes balalaikas, duduks, dombras and hurdy-gurdies," he said. "In addition to these instruments of that geographical place, we also needed it to have a female voice." Balfe achieved this with a 20-piece female choir, singing in Russian. "The Russian language sounds a bit hard or aggressive, but there's something very magical about it—something beautiful and rustic."

Led by conductor Gavin Greenaway, the score was recorded at Abbey Road Studios with 118 musicians and a 60-piece choir, consisting of both classical and gospel, featuring 40 men and 20 women. Balfe said, "Abbey Road has been the musical home to the Avengers Family for many years. With Black Widow, there was only one studio in the world that could match the epic-ness of her story, and the largest orchestra ever recorded at Abbey Road seemed fit for the occasion."