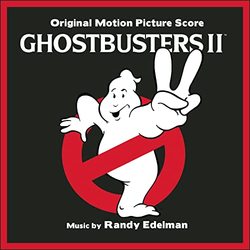 For the first time ever and 32 years after the film's 1989 release, the Original Score to Ghostbusters II is now available to stream and on CD format today from Sony Classical. Featuring score music by award-winning musician, producer and composer Randy Edelman, the 16-track album includes original recordings of the film classic's score as well as 3 newly re-recorded tracks and an additional song originally recorded by Edelman for the film but not featured in its final production. The album will also be available in vinyl format beginning Friday, October 16, arriving as a gatefold set featuring photos from the film.

Of the score, composer Randy Edelman says, "In Ghostbusters II, the characters and storyline were expertly conceived and then acted in the sequel brilliantly. The story took place a few years later, but in a sense each character already had a distinct personality, which hadn't changed a bit. In a way, they carried their own music and soul with them. Their interactions in each scene would determine if musical accompaniment was necessary, and, in most cases, it was not. The new storyline and menace the city of New York was facing, the dark nature of the evil Carpathian, that was where this score would be most urgent. That and the supernatural, explosive and inventive methods of the group of our forward-thinking pals, was where the heart of my score would and should lie. Though I had watched and thoroughly loved the original film several years before, I decided not to view it during my involvement with the sequel. I knew I needed to carefully sculpt a musical palette for this new specific screenplay and did not reference any aspect of the original movie, trying to give Ghostbusters II a well-deserved, new color all its own. I will always appreciate the fact that this decision of mine was never once questioned."

Speaking of his collaborators to the project, Randy continues, "Upon looking back at any score after so many years, a composer is surely cognizant of those who they were surrounded by, in a process that is always so challenging in many ways. In the case of the sequel to Ghostbusters, I was working on one of my first large scale orchestral works and one that followed the great success of the first movie. I was assisted by the great orchestrator, Mr. Greig McRitchie, music editor Kathy Durning, and engineers Elton Ahi and Robert Fernandez. I have elsewhere here thanked [Director] Ivan Reitman for a stern, yet assuring hand, in his direction at all times, and his confidence in trusting me totally throughout the always delicate process. The large orchestra gave me a spiritual high at each session, and I thank all the wonderful players who participated and lent their talent to my efforts. I got to revisit a few thematic moments for this collection, and it was a blast to be able to do that. It brought back all those incredible memories, and made that magic happen right now, once more. How lucky to experience it over again – I am one fortunate piano player!"