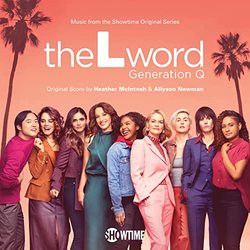 Milan Records today releases The L Word: Generation Q (Music from the Showtime Original Series) by composers Heather McIntosh and Allyson Newman. Available everywhere now, the album features original score music composed by McIntosh and Newman for the Showtime Original Series, which follows a diverse group of LGBTQIA+ characters in Los Angeles. Also included within the album, alongside the emotive score, is an anthemic electro-pop vocal track from Mr. Sister, entitled "Trouble Finds Me," as well as an orchestral cover of Robyn's "Show Me Love" from the Elegance String Quartet. The resulting 33-track collection perfectly complements the on-screen narratives of love, heartbreak, setbacks and success. Taking place 10 years after the events of the original groundbreaking series, The L Word: Generation Q is currently in its second season and premiering new episodes available Fridays on-demand for all Showtime subscribers.

Of the soundtrack, co-composers Heather McIntosh and Allyson Newman say, "Our work as co-composers for The L Word: Generation Q has been a dream realized. The collaborative process is a constant ebb and flow of musical ideas and feelings between us. Being accountable to one another for the work we produce has pushed us to be better composers. Working with showrunner Marja-Lewis Ryan has also been extremely rewarding. Our directive for the second season was to compose new material based solely on the feelings of family and connectivity that she wanted the show to evoke. It gave us remarkable freedom to explore and delve deeper. This enhanced the scoring process as a whole."

"When the original The L Word series aired, it was the first time I saw myself reflected in the media; it felt validating and gave me comfort in the knowledge that there was a whole queer community out there," adds co-composer Allyson Newman, continuing, "The fact that I am now a part of Generation Q is tremendously meaningful. Representation matters. The L Word continues to push boundaries and provide a platform for queer voices to be seen and heard."