Hollywood Records Announces 'Only Murders in the Building' Score Soundtrack 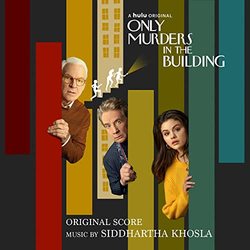 The Only Murders in the Building Original Score Soundtrack, featuring score composed and produced by Siddhartha Khosla is available today from Hollywood Records. The 10-episode series debuts on Hulu on Tuesday, Aug. 31 with the first three episodes. New episodes stream Tuesdays.

Commenting on the album, Khosla said, "It's been a dream working on this stunning show and scoring the sublime performances of Steve Martin, Martin Short, and Selena Gomez. I'm grateful that we navigated the challenges of this past year and we were able to record an orchestral ensemble of some of the very best musicians around. Thank you to our incredible producers and crew, my entire team, and the music folks at Disney and 20th Television for all the support in helping me bring this artistic vision to life."