Sony Masterworks to Release 'Venom: Let There Be Carnage' Soundtrack 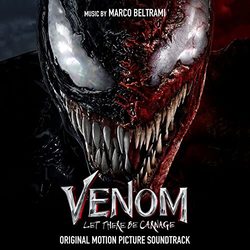 Of the soundtrack, composer Marco Beltrami says, "Because of COVID restrictions, we had to change the way we worked on processing acoustical sounds. Where we'd normally work with live musicians to create source material, here we had musicians record at home and then re-amp them at Sony. In addition, we worked with feedback looping to create some of the aggressive tones for Carnage. The film presented a lot of fun musical challenges, from a unique enhanced brass theme for Venom, to the altered woodwind theme for Carnage and Shriek, to a slightly bluesy feel for Eddie. Overall, in spite of those COVID restrictions, I feel very lucky we were able to still record many of the orchestral sessions at Sony and have it come out sounding so good!"