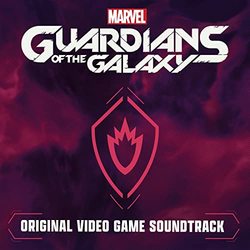 The latest from Marvel, Eidos-Montréal and Square Enix (the creators of 2020's Marvel's Avengers) Marvel's Guardians of the Galaxy puts you in control of the universe's least likely heroes. As fans have come to expect, the world of Star-Lord, Gamora, Drax, Rocket Raccoon, and Groot is full of incredible music and this game is no different – two soundtrack releases feature original music written for the game. Additionally, the Marvel's Guardians of the Galaxy playlist features 30 iconic licensed tracks from legendary artists such as Mötley Crüe, Bonnie Tyler, Billy Idol, Pat Benatar, Def Leppard, BLONDIE, and many more. All songs on the playlist will also be featured in the game itself.

Space Rider, the debut album by Star-Lord Band, the (fictional) eighties underground heavy metal act, is co-composed by Steve Sczepkowski and Yohann Boudreault. The songs of Space Rider have an origin story all their own: In the game's narrative, Peter Quill takes the name Star-Lord from his favorite band of the same name. With music being an important part of the Guardians universe, an entire album was created for the game.

Co-composer Szczepkowski said: "Music is intrinsic to the Guardians' franchise, and we wanted to make it focal to the gameplay experience. The soundtrack is infused in the DNA of the game, and our use of it goes far beyond usual expectations. Whether it's powering up combat in the Huddle or bringing Star-Lord's favourite band to life, every element was carefully woven into the lore to enhance the story of this rock and roll band of misfits."