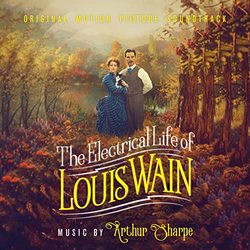 Milan Records today releases The Electrical Life of Louis Wain (Original Motion Picture Soundtrack) by composer Arthur Sharpe. Available everywhere now, the album features score music written by Sharpe for the film, which tells the true story of Louis Wain, the eccentric British artist known for his psychedelic depictions of cats. Working in close collaboration with his brother and the film's director Will Sharpe, the composer was tasked with creating a soundscape that carries the viewer not only across time spans but also on the trips into Louis' mind, which become more frequent and extreme as the film unfolds. Sharpe's score speaks to Louis' chaotically beautiful and ever-changing world, combining traditional orchestral instrumentation with an ensemble of unorthodox instruments like the musical saw, the theremin (performed on the score by a descendant of Leon Theremin himself), the mellotron, and more. The resulting 24-track collection captures both the electrical innovations of the time period that inspired Louis' artwork as well as the sweetness and levity inherent in both his own demeanor and the cats he became famous for representing. The Electrical Life of Louis Wain is out now in US theaters and arrives on Prime Video US today, Friday, November 5.

Of the score, composer Arthur Sharpe says, "The story is set in a certain era but Louis was thinking years ahead, so we tried to acknowledge that, especially when exploring his inner world and the theme of 'electricity'. Louis's idiosyncrasies are a huge part of what we explored with the music, and there is also the romance and the playfulness of the cats themselves. We had to find a way to marry all of those themes together, themes which could seem disparate on the face of it. It was a case of using traditional instruments, orchestral instruments, strings, woodwinds and so on but marrying that with things like the theremin, the musical saw, and other electrical textures. We wanted to explore electricity in different ways. It's definitely been a film where I've been able to research all sorts of weird and wonderful things."

"A major part of the world building comes down to the score," adds the film's director Will Sharpe. "Arthur and I started working together from the script stage to try to find a language for the music that captured the playful idiosyncrasies of Wain, while also delivering the deep emotional swells that come from the love story at the center of the movie."