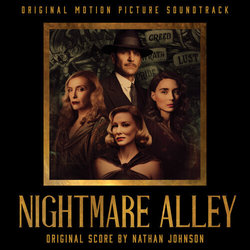 The Nightmare Alley Original Motion Picture Soundtrack with music by celebrated composer Nathan Johnson is available today from Hollywood Records. Known for his innovative film scores, Johnson is a multidisciplinary artist, bringing a unique approach to composing and recording that blurs the lines between stage, screen and audio-visual narrative.

Nightmare Alley, in theatres on December 17, tells the story of charismatic but down-on-his-luck Stanton Carlisle (Bradley Cooper) who endears himself to clairvoyant Zeena (Toni Collette) and her has-been mentalist husband Pete (David Strathairn) at a traveling carnival and crafts a golden ticket to success using this newly acquired knowledge to grift the wealthy elite of 1940's New York Society. With the virtuous Molly (Rooney Mara) loyally by his side, Stanton plots to con a dangerous tycoon (Richard Jenkins) with the aid of a mysterious psychiatrist (Cate Blanchett) who might be his most formidable opponent yet.

Collaborating with the film's director, Guillermo del Toro, Johnson's score for Nightmare Alley is inventive and varied, yet traditional. "My idea was we start with this lone character, not just a theme, not just a motif, but with one note. We have one note that is Stan, It's a single piano note and it's the first thing we hear in the movie," notes Johnson. For the first half of the film at the carnival, the music sets the mood – at moments hopeful, at others foreboding. In the second half of the film set in the city, it follows along like a traditional film of that period, bending and lifting to the different beats of the film's cadence, dancing a dark duet between characters Lilith and Stanton, as he spirals closer to his inevitable fate. Johnson adds, "Over the course of the movie Stan puts on these masks. He brings these people into his life. And we bring all these other notes around the single note that carries through the entire movie. it starts small in the carnival and then it gets big when he goes to the big city. Then we just strip it all down and at the end of the movie when he holds up his watch it's that one note that we started with."

Talking about the score, Guillermo del Toro noted, "One of the things the movie did, the movie rejected score. Whenever we put in score, the movie expelled it." After a meeting with del Toro, Johnson sent a piece he had composed for the character Lilith that instantly clicked. According to del Toro, he and Johnson worked tirelessly in LA. Del Toro recalls "We had four weeks to spot, score, compose and arrange the movie, then record it." Recording took place in London with a sixty-five piece orchestra and one unusual instrument – a large air-conditioning grate was used to replicate the sound of a guiro.