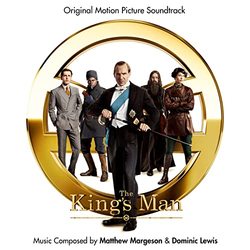 Today sees the release of The King's Man Original Motion Picture Soundtrack, featuring music by acclaimed composers Matthew Margeson and Dominic Lewis.
﻿
Margeson, who also scored both previous Kingsman films, enjoyed collaborating with Lewis on The King's Man score. "The two of us had always wanted to write something together, ever since our additional composer days at Remote Control," said Margeson and Lewis. "The stars aligned on this one, and we were able to really push each other to come up with the best modernized version of a 'throwback' orchestral score we could think of. From the onset, we focused heavily on the importance of strong melody and how those melodies could travel through the movie with traditional sweeping orchestration, all the while being cognizant to Mr. Vaughn's modern, visceral sensibilities. We are both so very proud of this music, and hope listeners are taken on a memorable musical journey, just as we were during this amazing process."

The King's Man, the prequel to Matthew Vaughn's previous two movies in the "Kingsman" film franchise - Kingsman: The Secret Service and Kingsman: The Golden Circle - unfolds the origins of the very first independent intelligence agency through a story that features a collection of history's worst tyrants and criminal masterminds, gathering to plot a war to wipe out millions, and the one man who must race against time to stop them.