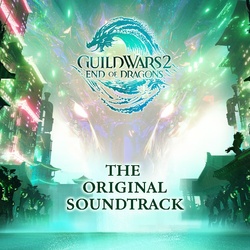 ArenaNet and NCSOFT's Guild Wars 2: End of Dragons - The Original Soundtrack is now available on all major streaming platforms. The music team is led by Composer and Music Director Maclaine Diemer and the soundtrack for the award-winning MMORPG coincides with the expansion's long-awaited release.

Guild Wars 2: End of Dragons is the third expansion for the award-winning and critically acclaimed MMORPG Guild Wars 2 and is the culmination of the Elder Dragon Saga. Diemer's lush, orchestral cues are mixed with futuristic synth sounds and traditional Korean music.

"For Guild Wars 2: End of Dragons, we wanted the music to sound like nothing players have heard in the game so far," stated Diemer. "There is the familiar grand and beautiful orchestra, some otherworldly acoustic and synthetic textures, and at the heart of it all is a strong influence from traditional Korean music. It's been a profound journey for me to open myself to this beautiful music and culture, and I am ecstatic to share that joy with the world."

The soundtrack includes 58 tracks, which perfectly captures the mood of the thrilling battles, intrigue, and exploration throughout the mysterious continent of Cantha. The score was composed by Maclaine Diemer, Michael Choi, Sojin Ryu, Andi Roselund, Bryan Atkinson, and Lena Raine, with an additional track from Joyce Kwon.

iam8bit and ArenaNet announced earlier this month their third vinyl collaboration. Featuring 31 tracks from the game, it gives fans the chance to experience the magnificent End of Dragons score in an exclusive new 2-LP vinyl collection. The vinyl album is available for pre-order on iam8bit.com.