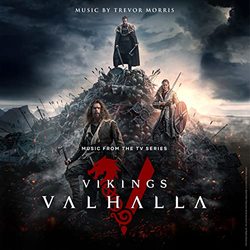 Sony Music Masterworks today releases Vikings: Valhalla (Soundtrack from the Netflix Series) by two-time Emmy Award-winning composer Trevor Morris. Available everywhere now, the album features score music written by Morris for the historical drama based on famous Vikings. Morris returns to Vikings: Valhalla after scoring all six seasons of the original Vikings series, which concluded in 2020. Set more than a hundred years after the end of Vikings, Vikings: Valhalla is available now to stream on Netflix and was produced by MGM Television.

Of the soundtrack, composer Trevor Morris says, "Working on Vikings: Valhalla was a chance to use everything we learned on the original Vikings and both take it with us and forget it completely. It was such a joy to sit with these new modern characters and find new voices for them through the music. I hope you enjoy the journey of Vikings: Valhalla as much as I did composing it."