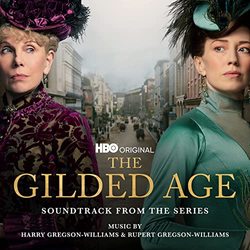 Watertower Music is excited to announce the release of the soundtrack to the HBO Max Original Limited Series The Gilded Age, the story which begins in 1882 with young Marian Brook moving from rural Pennsylvania to New York City after the death of her father to live with her thoroughly old-money aunts, Agnes van Rhijn and Ada Brook.

The Gilded Age (Soundtrack from the HBO Original Series) features the music of acclaimed Emmy-nominated composers Harry Gregson-Williams and Rupert Gregson-Williams. When the two composers set out to build a score, one of their main inspirations was the writing of The Gilded Age's creator/writer/executive producer Julian Fellowes.

"The story of old moneyed society pushing back against the unstoppable force of the new provided a contrasting backdrop of colors to work from," they remark. "From the outset it was clear that we ought to use a chamber orchestra as the sonic backbone to the score, thereby using instrumentation that would feel natural to the late 19th century time period."

Through their experimentation, the composers leaned into a more contemporary sound by adding various unexpected sounds to this traditional pallet, such as hammer dulcimer, kantele and ukulele, as well as the occasional arpeggiated synth element. The Gregson-Williams Brothers continue, "The multidimensional characters lent themselves to being scored with distinct melodic material that we laid out in the early episodes and developed as their individual stories unfolded." The Gilded Age marks the second time brothers Harry Gregson-Williams and Rupert Gregson-Williams have worked together having previously written the music for the limited series Catch-22, which was directed and executive produced by George Clooney.