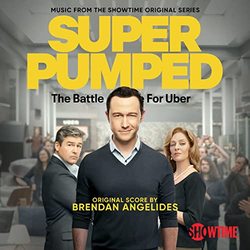 Milan Records today releases Super Pumped: The Battle for Uber (Music from the Showtime Original Series) with music by Brendan Angelides. Available everywhere now, the album features score music composed by Angelides for the first season of the new Showtime anthology series about the rise and fall of Uber's founders. Starring Joseph Gordon-Levitt, Kyle Chandler and Uma Thurman, Super Pumped: The Battle for Uber premiered on Showtime this February and will air the final episode of season 1 this Sunday, April 10 at 10/9pm central.

Of the soundtrack, composer Brendan Angelides says, "The rise and fall of Travis Kalanick is a modern day tragedy (in the classic sense). By recording percussion with car parts along with electronics, I wanted to combine a sense of tightly-wound manic tension with a perpetual chaos that a character like him creates."