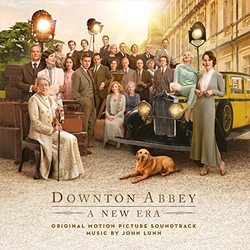 Decca Records are proud to release the Original Motion Picture Soundtrack to the much-anticipated cinematic return of the Global phenomenon, Downton Abbey: A New Era, scored by composer John Lunn. The soundtrack retains the distinctive sweeping orchestration and title motifs from the multiple Emmy Award-winning series whilst celebrating the story's entrance to a new decade with 1930s swinging Jazz and embracing the glitz of early cinema. The album embraces the exciting new generation of UK Jazz/Soul artists, featuring award-winning British Jazz and Soul singer Cherise Adams-Burnett, whose honeyed voice shines on tracks Crazy Rhythm and Am I Blue. Cherise also features in the film, performing the tracks from the soundtrack.

Celebrated Scottish composer John Lunn has received two Primetime Emmy Awards and two BAFTA nominations for his scores for Downton Abbey. Of the new soundtrack, Lunn says: "I've been working on Downton Abbey now for over ten years, but this is the soundtrack that I'm probably most proud of. It's been a joyous return to working with the director Simon Curtis, we had previously worked together on Twenty Thousand Streets Under the Sky, and he seems to bring the best out of me. Along with reworking familiar and well-loved themes, the new storylines have opened up a whole new vista for me."

Of her performance in the film and on the soundtrack, Cherise explains: "I would have never thought I'd be cast in ownton Abbey, to be part of the soundtrack is even more of a bonus to bring this great story to life. I tried to channel the energy of Josephine Baker, a notable rebel of her time and even today with my own soul music, I try to channel her individuality, fun and flare."