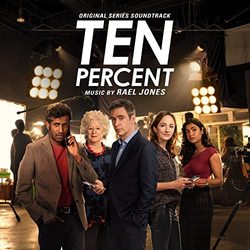 Rael Jones' rhythmic and lively soundscape deftly underscores the pace, fun and comedic drama of the series and the composer makes free use of a Latin feel throughout, variously smoothly seductive and pulsing with energy in turns. Emmy Award-nominated on three occasions, London-based, classically trained Jones is celebrated for being creatively adept, hugely talented and very versatile in his approach to his work, which ranges from composer, music producer, orchestrator, music editor and music programmer to performer. He recorded the original series soundtrack during October and November 2021 at the Masterchord Studios in London.

Of the soundtrack, composer Rael Jones commented, "I'm such a fan of the original French series, so it was a joy to be asked to write a soundtrack for this British re-imagining. It features fun, energetic music from me, using lots of Latin percussion, bass, guitars, piano, a string section and screeching trumpets. My biggest motivation was to put something joyful and kind into a world that is increasingly fractious, and I've taken influence from Latin music as it has the most infectious pizzazz of any music I know. Hopefully the overall effect is like a friendly voice inviting the listener to join in on this journey."