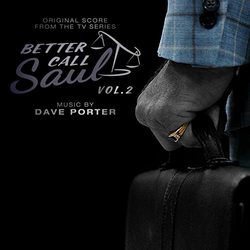 Milan Records today releases Better Call Saul, Vol. 2 (Original Score from the TV Series), music by composer Dave Porter. Available everywhere now, the album features score music written by Porter for AMC's prequel-spinoff to Breaking Bad. Porter returns to the Breaking Bad universe after having scored the entirety of the original series and its corresponding film El Camino: A Breaking Bad Movie, in what has been a longstanding creative partnership between the composer and series creator Vince Gilligan. Today's release features music from Seasons 3-5 of Better Call Saul and will be followed by a final volume of music coming out later this summer in conjunction with the series finale. The final season of Better Call Saul is rolling out in two parts with the first seven episodes premiering Mondays on AMC and AMC+ at 9pm through May 23; culminating with the series' final six episodes beginning July 11.

Of the score, composer Dave Porter says, "I am very pleased to be releasing my score from seasons 3-5 of Better Call Saul, which covers so many crucial moments for all of its beloved characters… Chuck, Nacho, Mike, Kim, Lalo, and of course charting the inevitable development of Jimmy into Saul into Gene. Included are many fan-requested tracks along with a few gems that were written for the show but ultimately were not included. Collaborating with Vince Gilligan and Peter Gould on Better Call Saul has offered me the largest canvas yet to explore the musical universe of Breaking Bad, and I'm so grateful to be a part of such an incredible production."