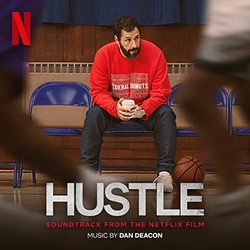 In conjunction with the film's theatrical release, Netflix will be releasing director Jeremiah Zagar's Hustle (Soundtrack from the Netflix Film) by composer Dan Deacon. The album is available on all major streaming platforms today, June 3. Hustle will be streaming on Netflix on June 8.

"I loved working with Dan. His work is the true heartbeat of this film. I've been a fan of his for years, having used one of his tracks in an early short film I directed with Nathan Caswell called 'Always a Fire'. Every time we put one of his tracks in the cut, we felt like cheering, and so we did!" – Director Jeremiah Zagar

"When director Jeremiah Zagar reached out about working together on his next film, I was ecstatic," says Deacon. "The Hustle script really spoke to me. Through Adam's character of Stanley, it brought into focus a lot of the hopes and goals I had at this point in my life. Early on, Jeremiah asked me to put together a playlist of previous work to send to Adam and his production company Happy Madison to use as 'temp' music in the edit. The song that got me the gig was "Become A Mountain" off my album Mystic Familiar, which you'll also hear in the film."

Deacon continues, "The core team and I had many conversations about weaving basketball into the sound of the score in a subtle but integral way. One way I approached this challenge was going to the Philadelphia 76ers' arena and making field recordings and impulse responses to create the reverbs for Stanley's visions of Bo's future. Many of the percussive elements throughout the score are heavily processed and effect-laden sounds of basketballs, rims, and other equipment specific to the sport. Scoring the games within the film felt a lot like scoring to choreography for dance and matching the tempos and movements of the players allowed for very lyrical patterns on the drum kit, strings, brass, and synths."

"It was a thrill for both the adult me and the 12-year-old me to make music for sick slam dunks and massive blocks, as well as heavy emotional scenes of family issues, self-doubt, and reaching for your dreams."