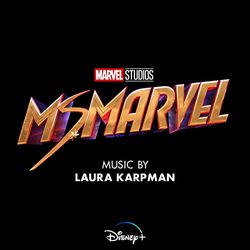 The Ms. Marvel Suite composed by Emmy-winning composer Laura Karpman and its companion video are available today. The Ms. Marvel: Vol. 1 (Episodes 1-3) Original Soundtrack is set for release on June 22 and will be followed by Vol. 2 (Episodes 4-6) on July 13.

Marvel Studios' Ms. Marvel is a new, original series that introduces Kamala Khan, a Muslim American teenager growing up in Jersey City. An avid gamer and a voracious fan-fiction scribe, Kamala is a Super Hero megafan with an oversized imagination- particularly when it comes to Captain Marvel. Yet Kamala feels like she doesn't fit in at school and sometimes even at home —that is, until she gets superpowers like the heroes she's always looked up to. Life gets better with superpowers, right? The first episode is now streaming exclusively on Disney+ with new episodes on Wednesdays.

Commenting on the track, Karpman said, "I can't contain my excitement for the project that is Ms. Marvel! I'm thrilled that today she enters the world. In the upcoming weeks I'll share stories about the fun musical collaborations that are featured in the score, but for now, take a listen to the theme for Ms. Marvel!!"