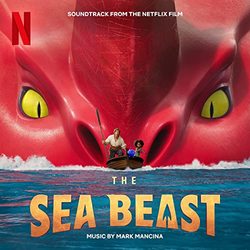 Milan Records today releases "Captain Crow," an original sea shanty from Netflix's animated adventure film The Sea Beast. With original lyrics by the acclaimed songwriting duo of Nell Benjamin and Laurence O'Keefe, "Captain Crow" is an exuberant track written in the style of a Celtic sea shanty to accompany the onscreen story of seafaring monster hunters. With its large, lively chorus, rousing fiddle and a steady rhythm of handclaps, "Captain Crow" is the perfect soundtrack to life on the high seas. The song makes its debut today alongside an official lyric video, giving fans a preview of what can be expected when the film arrives on Netflix Friday, July 8.

Of "Captain Crow," songwriters Nell Benjamin and Laurence O'Keefe say, "Every great sea adventure needs a great sea chanty. For this song, we looked to our ancestral Irish tradition of cheerfully bloodthirsty tunes with great melodies. Ironically, we've written cheerfully bloodthirsty songs before for musicals like Heathers and Mean Girls, but here was a chance to write one to be hollered in a dockside tavern. We hope sea dogs of all kinds will belt it until the oceans are safe or the pub closes."

Today's release is the first offering from the official soundtrack to The Sea Beast, which features music by three-time Grammy Award-winning composer Mark Mancina. Available everywhere Friday, July 8, the album reunites Mancina with Academy Award-winning filmmaker and The Sea Beast director Chris Williams, the duo having previously worked together on 2016's Moana. For their latest collaboration, Mancina has crafted an expansive, multilayered soundscape that adds depth and nuance to the seafaring epic while capturing its adventurous spirit – preorder here.

Of the soundtrack, composer Mark Mancina says, "How grateful I am for the opportunity to have composed The Sea Beast's original score. A successful score, in my opinion, is one that deeply enhances the film, yet can stand on its own. I think our team accomplished that with this score. It was also a great pleasure to collaborate once again with the brilliant Chris Williams."

Of his collaboration with Mark Mancina, director Chris Williams adds, "When I started developing The Sea Beast, I knew I wanted to tell an original story that evoked the classic adventure films I grew up with. And I knew, without a doubt, that Mark would be perfect for it. Mark brought his talents to bear, and created a score that acknowledged its influences without feeling trapped in the past. It's an invigorating blend of the timeless and the new, and it's everything I could have hoped for."