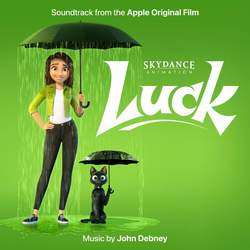 Of the soundtrack, composer John Debney says, "Writing the music for Luck was a dream come true. I fell in love with the idea of a Land Of Luck which mirrors and influences our own world. Working with Peggy Holmes was such a pleasure. Peggy is a wonderful director with a clear and unique vision. Being reunited with my old friend John Lasseter was also a dream come true. The main theme is one I've dedicated to my beautiful granddaughter titled: 'Sam's Theme.' I hope everyone enjoys the music from Luck as much as I did creating it!"