Disney Music Announces 'Only Murders in the Building' Season 2 Soundtrack 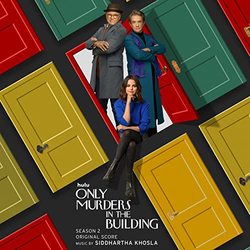 The Only Murders in the Building Season 2 Original Score Soundtrack arrives Friday, August 12th on Hollywood Records. It accompanies the second season of the 17-time EMMY Award-nominated smash hit series, Only Murders in the Building, streaming on HULU now in the U.S. and on Disney+ Internationally as a Star Original. New episodes stream Tuesdays with the Season Finale set for August 23.

The album includes 23 tracks of original score composed and produced by six-time EMMY Award-nominated composer Siddhartha Khosla. The music hinges on orchestral vignettes and motifs reminiscent of classic detective flick and film noir soundtracks from Hollywood's Golden Age as evidenced by cues such as "We're Back" and "Death Threat." At the same time, it treads new territory with the likes of the unabashedly funky "Son of Sam."

This time around, Siddhartha recorded with a cohort of elite musicians at the iconic Capitol Studios and The Village. To build this vision, he heeded the advice of co-cocreator John Hoffman who told him, "Don't be afraid to do something weird."

"You have these iconic performers and actors on this show and they're not holding back, so I try not to as well," comments Khosla. "In Season Two, the show becomes a bigger version of itself. We start exploring backstories of characters, and we go deeper into the history of the Arconia. I was inspired by just the expansiveness of that world. The mystery grows. In terms of influence and inspiration, the musicians that play on this score are some of the best in the world."