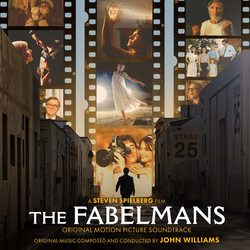 Sony Music Masterworks today releases The Fabelmans (Original Motion Picture Soundtrack) by five-time Academy Award winner John Williams. Available everywhere now, the album features an original musical score composed by Williams for director Steven Spielberg's deeply personal cinematic memory of the forces, and family, that shaped his life and career. The soundtrack marks the latest collaboration between Spielberg and Williams, whose longstanding creative partnership spans nearly 50 years and 30 films. From E.T., Jaws and Jurassic Park to Schindler's List, Lincoln and Saving Private Ryan, Williams and Spielberg's collaborations have produced some of the most iconic and well-recognized music in film history. The Fabelmans is available in select theaters now and will expand to theaters everywhere on November 23.

"The Fabelmans marks the 50th year of John reshaping my stories through his music – this time for the most personal film I have ever made," Steven Spieberg says. "John knew my parents well and loved introducing them to the orchestra during our scoring sessions, which made my Dad so proud, and left my Mom beaming. He wrote this score as a gift to them and, when he first previewed it for me on his Steinway, I knew he had made this his most personal gift to me as well. Thank you, Maestro."

The score was deeply meaningful for Williams, too. "Composing the score for The Fabelmans was a particular joy for me, given the personal nature of the film and its depiction of characters who seem to be so closely associated with Steven Spielberg's own childhood and family," John Williams says. "Over many years, I knew and greatly admired Steven's parents, and I was always very impressed by his mother Leah's musical talent. This is a truly special film, so lovingly directed by Steven and featuring a touching and very personal screenplay by Steven and the always-brilliant Tony Kushner. I'm honored to have played a small part in the making of this film."