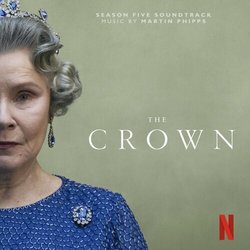 Sony Music Masterworks today announces the release of The Crown - Season 5 (Soundtrack from the Netflix Original Series) with music by BAFTA and Ivor Novello Award-winning composer Martin Phipps. Available everywhere now, the album features score music written by Phipps for the fifth season of Netflix's historical drama about the reign of Queen Elizabeth II. Phipps reprises his role as the show's composer following his critically-acclaimed scores for seasons 3 and 4, which notably garnered his sixth and seventh career Emmy Award nominations. The fifth season of The Crown is available to stream now on Netflix.

Of the soundtrack, composer Martin Phipps says, "It's been a huge pleasure to continue the musical development of The Crown and update its world to the 1990s. As ever, the characters have such breadth & depth that's it always rewarding to score their emotional journey."