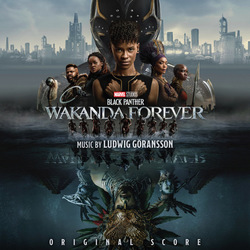 The Black Panther: Wakanda Forever - Original Score, composed and produced by Oscar, Grammy and Emmy award-winning composer Ludwig G—ransson was released today via Hollywood Records. Drawing inspiration from the Nigerian and Mesoamerican cultures that influenced the storyline of the film, G—ransson recorded the film's score (and soundtrack, which he also produced) in six studios, across three continents and five countries, working with over 250 musicians, two orchestras, two choirs and over 40 vocalists. Black Panther: Wakanda Forever, directed by Ryan Coogler and produced by Marvel's Kevin Feige and Nate Moore, opens nationwide today.

The Black Panther: Wakanda Forever  Original Score comes on the heels of the release of the film's soundtrack, Black Panther: Wakanda Forever - Music From and Inspired By, out now via Roc Nation Records/Def Jam Recordings/Hollywood Records. Produced by G—ransson and executive produced by Ryan Coogler's Proximity Media, in collaboration with Archie Davis and Dave Jordan, the soundtrack features over 40 international artists recorded in Lagos, Nigeria, Mexico City, London and Los Angeles including Rihanna, whose lead single "Lift Me Up" - which she co-wrote with G—ransson, Coogler, and Tems - had a record-breaking debut as it became the most-added song in U.S. radio history, amassing the most ever single day spins and the largest ever single day audience. Other artists featured on the soundtrack include Burna Boy, Tems, Fireboy DML, OG DAYV Ft. Future, CKay Ft. PinkPantheress, E-40, AlemÃn Ft. Rema, Blue Rojo and many more.

"I've never worked on both the score and the soundtrack of a film before," said G—ransson. "It was my two worlds coming together, scoring and recording with artists, intertwined into one format. To create a complete unique sound experience we had to visit these environments, from Nigeria to Mexico, to make the process as real and as truthful as possible for the artists and musicians who worked on the music."

For their fourth cinematic collaboration, Black Panther: Wakanda Forever, Coogler and G—ransson set out to create an innovative soundscape. Ryan and I have always wanted to create a truly immersive musical experience, where songs and score go hand in hand, to create one musical statement from beginning to end," said G—ransson, whose extensive work producing artists (Childish Gambino, Adele, Haim, Justin Timberlake) as well as his work scoring films and TV series made him uniquely qualified to helm both parts of the soundscape. "Ryan gave his all to this story - there are themes of family, motherhood, loss, grief, legacy, rebirth and morality here and we wanted to make sure all of that was reflected in the music. It ultimately becomes a story of celebration."

Commenting on the characters' themes G—ransson said, "There are a lot of different points of view in this film and an even broader range of emotions. What's driving each character is so compelling and complex, and that opened up a lot of possibilities for some wildly different sound worlds and themes to intersect and play off each other in some interesting and surprising ways. Sometimes that translated into a big string orchestra at Abbey Road quietly playing almost painful melodies and sometimes it was certain themes evolving into others as characters transformed, using Mayan instruments or earth-shattering synths, hushed whispers or Vivir Quintana representing sirens. In addition to Vivir Quintana, I had the honor of working with singer Foudeqush whose voice epitomized the delicate and beautiful world of the Talokan."