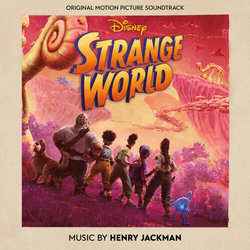 The sweeping and epic score is composed and produced by Jackman. The soundtrack features 31 tracks including "They're The Clades!" with lyrics by Kevin Del Aguila.

Commenting on his score, Jackman said, "I began writing the Strange World overture away from picture and came up with this esoteric series of underlying arpeggios and dissonant harmonies which evoke the film's sense of mystery and otherworldliness. I then situated an adventurous main theme on top of it, which had to be quite angular to fit the odd notes I had conjured. I wondered if I had gone a bit overboard with the overture, but when the directors Don Hall and Qui Nguyen heard it for the first time, I was overjoyed to hear them say that it was everything they ever imagined Strange World could sound like."