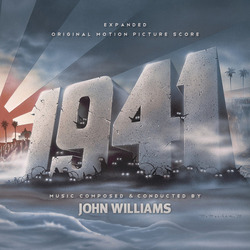 Track Listing Legend for Disc 2:
* Traditional, Based on "The Rakes Of Mallow," Arranged by John Williams.
** Including "By the Beautiful Sea" Words: Harold R.Atteridge, Music: Harry Carroll.

Williams provides a delightful, full-on orchestra assault (featuring one of the most infectious marches ever written for film) to compliment this cult-classic's slap-stick tapestry of WWII-era paranoia exploding in Hollywood.