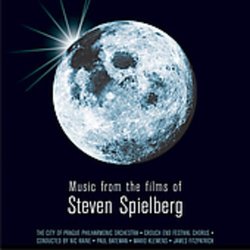 Music from the Films of Steven Spielberg

Review: Music from the Films of Steven Spielberg

Crisp magic. The City of Prague Philharmonic Orchestra, Silva Screen's old and tested workhorse, has been put together the musical highlights of Steven Spielberg's career as a director of adventurous, magical, and often touching motion pictures. What we get is a two-CD set filled with sharp and lively performances of the great John Williams canon, with a slight detour in the musical territories of Billy Goldenberg, Quincy Jones, and Jerry Goldsmith. The score aficionado might have grown bitter and cynical enough to relegate those famed pieces to the 'been there, heard that' corner of their mind, but younger listeners will undoubtedly be entranced by the orchestral might and magic that was once conjured up on a yearly basis, back when classical scores were not only expected but cherished.

The album opens with the "Raiders March" from Raiders of the Lost Ark, a staple of the Spielberg-Williams Golden Age, given a rather radiant treatment by the brass section but marred by an otherwise too rushed tempo. The cue "The Cafe / Truck Attack" from Goldenberg's Duel score makes good use of Herrmann-esque frenetic string work and stands as an addictive highlight of the tribute album. We are then treated to the Southern whimsy of "Sugarland Express Main Title" showcasing the early talent of a young John Williams. After a disappointing performance of the "Main Title" from Jaws, we move on to a majestic and triumphant suite from Close Encounters of the Third Kind played with gusto and broad emotions by the Prague Philharmonic. The light and patriotic march from 1941, delivered with a playful catchiness by the various orchestral sections, leads to the way to the first of two mini-suites from the Indiana Jones canon: both the "Map Room" and "The Basket Game" contain more-than-adequate performances. "Adventures on Earth" from E.T. the Extra Terrestrial might have been overheard, but it's hard not to fall for what is easily one of the best workout the City of Prague Philharmonic has to offer us, an eleven-minute piece filled with raw magic and thematic power.

The Williams joy train is interrupted by two tracks by Goldsmith and one by Jones. Goldsmith's "Main Theme from Poltergeist" is beautifully rendered by the orchestra accompanied by a children's choir, while his "Suite from Twilight Zone: The Movie" showcases the late Maestro's diverse talents, right down to the Saint-Saëns-esque "Danse Macabre" segment on the twitchy fiddle. Quincy Jone's finale cue from "The Color Purple" wrings an emotional performance out of the strings and woodwinds sections, one half understatement, one half gut-wrenching melodrama.

A choral outpouring of religious zeal takes us back to Spielberg's sad tale of an American boy taken prisoner in China by World War II Japanese soldiers in Empire of the Sun. Its "Exsultate Justi" is exuberant in its Baroque, Handel-like hallelujahs. "Finale" and "Mine Car Chase" from Indiana Jones and the Temple of Doom, as well as "Indy's First Adventure" from Indiana Jones and the Last Crusade, help bridge the first and second CDs together, with a rightful combination of adventurous intensity, heroism-tinged Eastern modes, and pulse-pounding brass work characterized by strong performances and a great recording. "Main Themes" from Hook stands out as a triumph of flightiness over seriousness, of orchestral fun over drama, with an addictive theme given the no-holds-barred treatment it deserves by the City of Prague Philharmonic. Another highlight is "Dry Your Tears Afrika" from Williams' Amistad, with a raw, joyous, choral power to which you can't help but become addicted. The chords are solid, the brass accompaniment lends the piece an added might, and the choir does an amazing job bombasting its way into our hearts.

The rest of the album, from a performance of Saving Private Ryan's "Hymn to the Fallen" which emphasizes the beautiful violin work of the original composition to the Eastern European "The Tale of Viktor Navorski", trades the magic for a simpler charm. It is a bit of a letdown, no matter how good the orchestral treatment, coming to the tail-end of Williams' current career and finding the whimsy gone, replaced by a slightly jaded emotional core, like a kid that's all grown up but remembers the old days fondly. We are taken back to those old days one last time with the "End Credits Suite" from Indiana Jones and the Last Crusade which allows us to marvel at just how good film music was 'back in the days', with an awe-inspiring theme on the brass and the catchy Raiders' March, performed right this time.

Apart from a few blunders, the City of Prague Philharmonic delivers mighty performances of the Spielberg musical canon, with a particularly crystalline and powerful brass section and great choral ensembles. The two-CD album might not be suited to those who have heard this music over and over, but as an introduction to the marvelous and magical world of Steven Spielberg (and, let's face it, the canon of John Williams' career), one couldn't ask for anything more except, perhaps, for a couple of bicycles and a full moon.